Brooks Orpik has announced his retirement today from the @NHL after 15 seasons. The two-time Stanley Cup Champion skated in 1,035 regular-season games.

Congratulations on a terrific career, Brooksie. And thank you for everything! #ALLCAPS

Brooks Orpik has retired from the NHL after 15 seasons. The two time Stanley Cup winner won the Cup each with the Pittsburgh Penguins and the Washington Capitals. He tallied 18 goals and 176 assists over 1,035 regular season games in addition to 4 goals and 22 assists in 156 playoff games.

The player known in the Caps locker room as “Batya” (Russian for “dad”) receives lots of love and thank you’s on social media from his teammates,

Truly going to miss you a lot. Thanks for all the help and support during the years. Thanks for always looking after me on and off the ice. You have been a true friend and role model for me. Good luck in the future and wish you and the family all the best. Brooks Orpik!

What a career for a great player and role model to all! Thanks for everything Brooksy! https://t.co/0mLdkwq3aC

Ovi on Brooks Orpik: “Batya was a great leader in our locker room & was so important for us to win our first Stanley Cup. We will miss his presence in the room & on the ice. Not only was he a great leader & a player, but he was a better person”. #ALLCAPS

I am here for this. Beal is maybe the most underrated player in the NBA and exposure from a box office hit (let’s be honest, you’re going to go watch it) would help propel him into stardom.

Not sure this even happens, but Beal would join Damian Lillard, Anthony Davis, Klay Thompson, and WNBA Stars Diana Taurasi and Nneka Ogwunmike. Talk about star power, right Windhorst?

CBS Sports– “In all honesty, he’s been recruiting players to come and try to be in ‘Space Jam’ with him this summer,” Windhorst said, per Yahoo Sports, “and he hasn’t been able to close some of those deals. Some of the top guys he wants to come and be with him in the movie … [are saying], ‘You put me in the movie where you’re the star, I’m gonna be the one you’re dunking on.'”

Toronto Star- Raptors president Masai Ujiri says he appreciates the interest from other NBA clubs, but his roots are in Toronto.

Ujiri held an end-of-season news conference Thursday, in which he talked about his future in Toronto, winning an NBA championship and the growth of basketball in Africa and Canada.

Reports surfaced shortly after the Raptors won their first NBA title that the Washington Wizards were preparing a lucrative offer to lure Ujiri out of Toronto.

Ujiri’s wife is from Washington, and the Wizards were reportedly offering an ownership stake in the team.

This is obviously a huge blow to the Washington Wizards, who have yet to name a replacement to former GM Ernie Grunfeld. Ujiri was the name most talked about online and in the media when discussing front office candidates. Ujiri’s added NBA Champion to his resume this Summer to go along with a track record of helping franchises make the next step. He briefly worked as a scout for the Denver Nuggets before being hired by the Toronto Raptors in 2008 as assistant GM. He returned to Denver as GM and VP of Basketball Operations and won the NBA Executive of the Year award in 2013 before returning to Toronto as GM and President of Basketball Operations.

It is obvious why Ted Leonsis wanted Ujiri to run the front office. During his Toronto tenure, he took Toronto from 4th in the Atlantic to 1st in his first year, ending a five year playoff drought, won 5 division titles (including having the best record in the East in the 17-18 season), and ECF in 2016. He took a huge risk in firing Coach of the Year winner Dwane Casey and pulled off the steal of the year (and maybe century) by trading for Kawhi Leonard AND Danny Green without giving up any young pieces and just one protected 1st rd pick. The Wizards wanted him so badly, they were willing to give him ownership stake.

Washington Post- For several weeks, speculation has persisted about the Wizards’ interest in Ujiri. By late Thursday night, various news outlets detailed the proposed offers: close to $10 million annually, six years for $60 million or even a percentage of ownership and control over other Monumental Sports & Entertainment properties. The Post also reported on the Wizards’ link to Ujiri and that “a potential offer would have to include a pathway to an ownership stake.”

$10 million a year is a huge pay day, not to mention the ownership stake that was reportedly offered. Leonsis has since denied that any offer was or would be made, stating that he would “take his time” in forming the new front office. With the 2019 NBA Draft already in the books and free agency starting in five days, it seems that Leonsis is content to wait this out until the right candidate comes along.

This is the first time Ian Mahinmi has gotten into a game since Feb. 4.

Like a phoenix from the ashes, Ian Mahimi has returned. The Wizards prized signing of the summer of 2016 (4 years/$64 million. Yuck.) has seen game action for the first time since Feb. 4. With Thomas Bryant playing well off the bench and the acquisition of Bobby Portis, Coach Scott Brooks decided to bench Mahimi despite Dwight Howard being out indefinitely (he’s obviously not playing again this season).

Is there anyone with a better gig than Mahimi? Collecting paycheck after paycheck while not having to play a single minute? Sounds like good money if you can find it.

Tom Wilson is in the penalty box.

Music to my ears. Capitals fell 4-2 to the Montreal Canadiens in what has been a shaky preseason, but at least Tom Wilson is in midseason form. 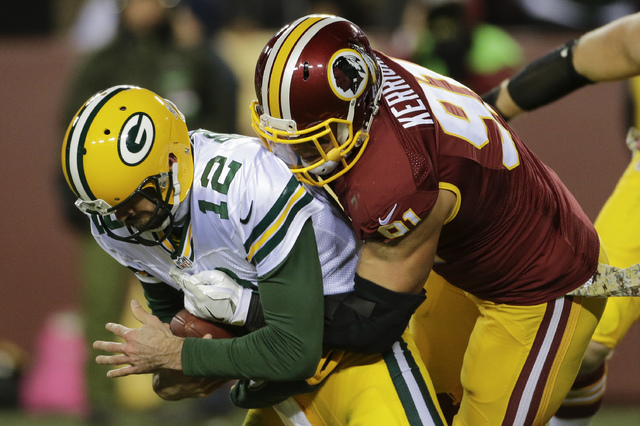 Asked what Floyd and Perriman can add to #Redskins offense, Gruden replied “I don’t know I just met them yesterday.”

Not exactly inspiring hope with that answer, Coach. But I will give him the benefit of the doubt here and say he was just being honest. Floyd has produced in the past but has short tenures with the Patriots, Vikings, and Saints since 2016. Perriman is only 25 but a series of knee injuries and setbacks have cost him time. There is no guarantee either player will fit in Gruden’s passing attack, but at this point, it couldn’t hurt to see if they can muster up any sort of spark in the air.

Perriman and Floyd in practice. pic.twitter.com/coko0lUKp4

The first look at Washington’s new signing at practice.

PRich: Knee, huh? Nah, nothing there. Did have test on the shoulder. We'll see.

I guess they were signed as insurance for Richardson’s sho-…. kn-…. whatever he’s dealing with.

Redskins and Devil’s Backbone release new “Ale to the Redskins” beers. There’s a burgundy ale and a golden ale. pic.twitter.com/4qmn4dUZz8

Ale to the Redskins! Get it? These beers will be on sale at FedEx Field at all the Devil’s Backbone stands this season.

I need a gif of T.J. Oshie drinking one of these through his shirt while Tom Wilson cheers him on.

Skins tied for first. I am the point where I feel dangerously over optimistic about this team. We’re on to Indianapolis!

Starting the season off right is correct. In a huge road win with a new quarterback, Jay Gruden won a season opening game for the first time. Every unit on this team seemed to be firing on all cylinders. Alex Smith went 21-30 for 255 yards and 2 TDs. He was boring, and that’s a good thing. Boring doesn’t throw a bad interception when the team is driving. Adrian Peterson racked up 166 yards and 1 rushing TD on 28 total touches while Chris Thompson had 128 yards and 1 receiving TD on just 11 touches. This duo is exciting, Peterson is the workhorse he wanted to be in New Orleans and Arizona while Thompson continues to be the change of pace back who can hit the home run at any time. If these two are healthy, the Skins will have a dangerous backfield. Jordan Reed scored a touchdown as well, he would finish with 4 rec and 48 yards.

Defensively, there was not much to complain about. The Cardinals only ran 49 plays netting 213 yards. David managed 37 yards on 9 carries with a touchdown on the goaline. Quinton Dunbar was the stand out performance to me. The Skins went out and signed FA CB Orlando Scandrick then subsequently cut him during training camp, effectively naming Dunbar the starter opposite Josh Norman. Dunbar finished the day with 5 tackles, 3 passes defended, and 1 int. Pretty impressive numbers for a guy who was playing wide receiver just three seasons ago.

Quinton Dunbar is feeling it today.

The 6'2 Cornerback is all over the field today, and this time comes up with the Bradford interception.#Redskins ball. pic.twitter.com/DrAUEtUuJ3

All in all, Skins fan have good reason to feel optimistic. The run game is lethal, Alex Smith is leading the passing attack, the front seven on defense looks stout. Next week will be a big test for the secondary as they face Andrew Luck and the Colts.